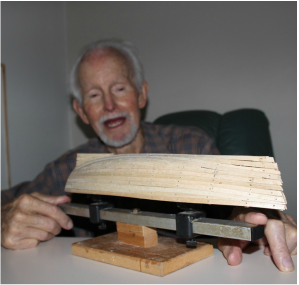 Rae Crosbie
THE PATH TO WAR
On December 6th, 1941 the Japanese didn't suddenly wake up in the morning and say, "Let's duck off and bomb Pearl Harbour tomorrow".
There's a lot more to the story and we are taking a look at the Asia Pacific region in the 125 years leading up to the Pacific War using scale models and original graphics.
This is a period that greatly affected Australia, but few Australians really know much about it.
Rae Crosbie has come on board to assist with his skills as a wooden model boat builder. The particular subject is the British/Chinese Opium Wars (1839-42 and 1856-60), the model is a Chinese War Junk. 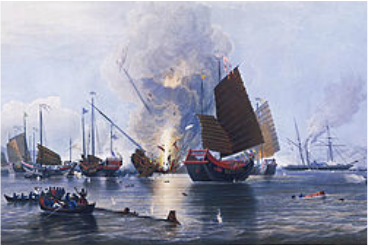 HISTORY - CHINA
This project will trace the lead-up to the Pacific War back to the Opium Wars (1839-1860). In the 17th and 18th centuries the purchase of Chinese goods was draining European silver reserves, this imbalance of trade was causing the coffers to become near empty. The British decided to copy the success the Dutch had in what is now Indonesia, by introducing opium. The Chinese Government attempted to stop this drug trade resulting in the Opium Wars (1839-42/1856-60). 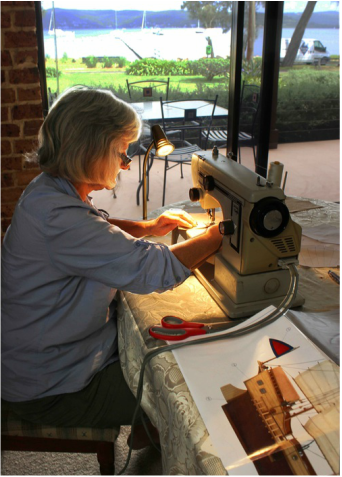 Dora Rea
As the mid 1800s approached steam power provided the opportunity for Europeans to attack China's heart. British technology was epitomised by a naval action where an iron hulled, well armed warship 'Nemsis' , destoryed a fleet of Chinese 'war junks'. In reality these were only lightly armed vessels designed to police China's river waterways. The Chinese attempts to stop the opium trade was defeated and a period the Chinese call 'The Century Of Shame' commenced. The Europeans undermined the Chinese government by supporting local war-lords, suppying them with arms and other supplies via China's great rivers.
While European powers exploited a weakened China through trade, in 1931 the Japanese took a more direct approach and invaded Manchuria. The U.S. provided weapons to a Chinese army and a bloody war ensured with the Chinese peasants caught in the middle. Continued U.S. actions to stymy Japan was a major cause for their attack on Malaya, Pearl Harbour and the Philippines in 1941.
THE MODEL
January 2015 Rae had the frames of our 'war-junk' in place and the first of the planking was laid down on the hull. Meanwhile Dora sewed up the sails for the model, as suggested by Rae, she soaked the sail material in tea to 'weather' it before cutting the sails to shape and then double stitching them.
By the end of April, Rae had all planking in place on the hull and decks, the hatches, winches, guns, masts etc are also inlace. Then we got a call and on 13th March we picked up the finished model.
Below: Rae was happy with the finished result… while we were absolutely delighted.
As a young man, Rae, was a merchant seaman, he might be getting on a bit in years now but this model shows he hasn't lost any of the skills developed during almost a lifetime working in wood, after he left the sea.
Models made from plastics, white metal, brass and die cast are one thing, many being extremely fine models, and these will continue to feature in 4HR's exhibitions. There is, however, nothing like a model of a wooden ship in real wood, we know everyone who sees our War-Junk will agree, this handcrafted individually planked model is a beauty.
This example of one of these brave little ships will take pride of place in the exhibition which is gradually coming together. We hope every school kid on the Central Coast will get to see Rae's model 'War-Junk' and learn of the history behind it. 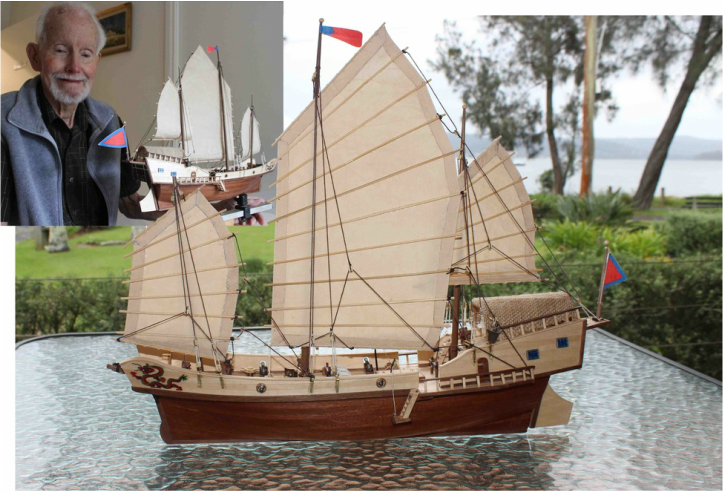 MODEL Number 2
A second model under construction is our diorama 'Unrest On A Chinese Waterfront'. This will illustrate Chinese history in the 1920s, eighty years on from the 'Opium Wars'.
From the time of the 'Opium Wars' European powers sort to increasingly weaken the Chinese central government by supporting local War-Lords. They did this by supplying arms to them via China's great rivers. Unrest was common and a strong military presence always helped to protect European and U.S. interests. 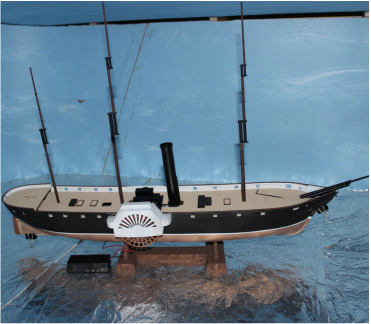 HISTORY - JAPAN
Not to be out done by the British in China, the U.S. saw Japan and a plum ripe for picking. In 1855, the U.S. East India Squadron, termed the 'Black Ships', under Commodore Matthew Perry steamed into Tokyo Bay. They had a Presidential letter demanding Japan open their ports to American ships. Perry helped 'convince' the Japanese this was a good idea by shelling an ancient religious complex on the shores of the Bay.
THE MODEL
Our model is of Commodore Perry's flagship, the USS Susquehanna. This model was started early 2014 but work was suspended mid year when Gosford Council's Community Grant allowed the purchase of materials to start our Anzac Centenary exhibitions.
A lot of the Susquehanna's construction time has been to motorise the paddle-wheel... and man! was that a job and a half.

WWII Sea Planes
Under construction to compliment the WWII  ‘Rathmines', RAAF Sea Plane Base’ diorama.
Left: is ‘Supermarine Sea Otter’, detail of seat belts, which are made from thin brass sheet is shown. The Sea Otter replaced the famous WWII ‘Supermarine 'Walrus’/‘Seagull’ which Australia's 'Dicky' Williams was instrumental in seeing it take to the air.
The Sea Otter operated with the RAN as a rescue aircraft from the carrier, HMAS Sydney, until superseded in the role by helicopters. 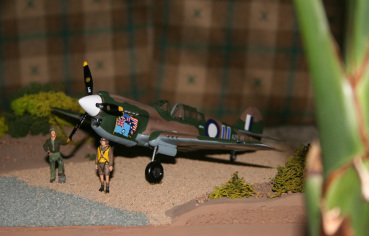 Darwin Diorama
This mimi diorama built by Tony to 1:43 scale, it is of Sqn. Ldr. R.C. Cresswell's P-40 Kittyhawk the first aircraft to shoot down a Japanese 'Betty' bomber at night over Darwin in November 1942.
The 'Flags' nose art was painted by 'Leading Aircraftman' LAC Newton. 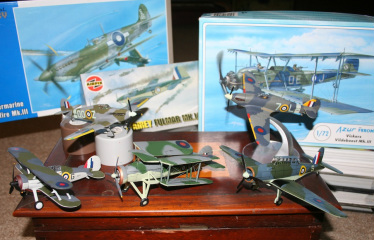 Early British WWII aircraft
All 1:72 scale finished models include:
Gloster Gladiator,
Hawker Hurricane,
Fairey Swordfish, a lot of effort went into modifying this model to show the wings folded. The week it was finished a commercial kit became available with folded wings.

The three kits are:
1:43 scale Supermarine Seafire, it is intended to modify this kit to show the wings folded and brass detail set has been acquired and will be used in the modification.
1:72 scale Fairey Fulmar and
1:72 Vickers Vildebeest, a beast of an outdated aircraft which was the main defence for Singapore in early 1942. Also (not shown) is a kit of a Fairey Albacore. 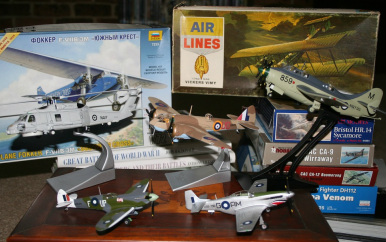 ﻿Aircraft Of Australia
(or with a link to Australia)
1:72 scale RAN Sikorsky Seahawk,
RAAF Pacific theatre Supermarine Spitfire,
RAF Bristol Blenheim which provided ‘air-cover’ to the unfortunate ANZACS during the disastrous Greek/Crete campaign,
RAAF Mustang,
RAN Fairey Gannet
Yet to be assembled kits include:
Vickers Vimy, to be modified to resemble Ross & Keith Smith’s 1919 England to Australia air race winning aircraft.
CAC Wirraway and Boomerang, both of which provided target practice for the A6M (zeros) in 1942.
De Havilland Sea Venom, the first RAN jet aircraft.

Close up of a RAAF Bristol Beaufighter from the mid to end of the Pacific war. This was an effective weapons platform, provided there was already total control of the air. There is, however, no evidence the Japanese called them 'whispering death'.
Behind is a 1:43 Brewster Buffalo. 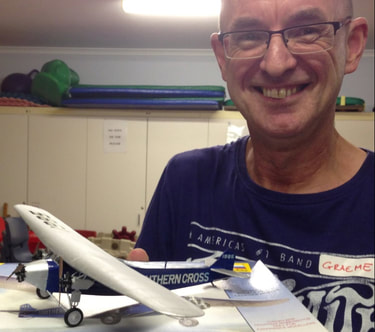 GRAEME STARTS TO REDUCE THE NUMBER OF UNASSEMBLED KITS ON HAND.
With about 25 Australian aircraft or aircraft linked to Australian in hand and about that many again in kit form waiting to be assembled, Graeme offered to put a dent in the backlog.
​

An RAN Bristol Sycamore HR.14 helicopter, which operated from HMAS Melbourne for search and rescue, and plane guard duties. Later in a civil role with Ansett-ANA Airlines.

A Dornier Do24T which came to Australia from the Dutch East Indies in front of the Japanese invasion. Then operated with the RAAF from Rathmines on Lake Macquarie NSW. ​​ 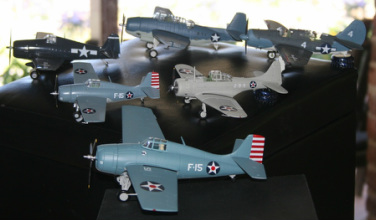 The Most Powerful Battleship 1:700 scale model
IJN Yamato, the biggest, most powerful, best protected battle ship ever built. This ship could have probably held its own against any two or even three US or British battleships. The Bismarck (the Germans had the biggest guns, they had the biggest ships) on a one to one, would have stood no chance.
Also in picture (look closely in the foreground) is 1:700 scale USN submarine USS Gato.

USS ESSEX 1:350 scale model
Six months after the start of the Pacific war, in the first week of June 1942, the core of Japan's aircraft carrier force was destroyed at the Battle of Midway.
In Nov. 1942 only six months after Japan's four irreplaceable fleet carriers were sunk, the USS Essex was launched at Newport News, USA.
Laid down six months before hostilities commenced, Essex was the first of 32 fleet carriers planned by the US along with numerous escort carriers, 24 of the planned 32, Essex class fleet carriers were finally built. These ships would come to totally overwhelm Japan's navy and rule the Pacific.
Home
Powered by