OUR MODELS AND YOUR INPUT WELCOME
4HResearch is always interested in hearing from anyone who may wish to contribute information, pictures and particularly at the present time, model making skills.
What do model makers do with their personally valuable creations?… sometimes they put them in a display box, sometimes they just go in a cupboard until a few bits get broken and they get chucked!
How about putting your work on public display within a 4HR project?
No matter if it is kit building, kit bashing or scratch building, ship, aircraft, armour, figures and railway modellers are invited to enquire. If you are interested please email us through the 'CONTACT US'. All contributions to a 4HR exhibition will be acknowledged on the exhibition piece and on this website. 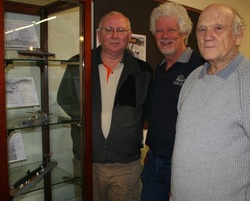 Erina Branch of Gosford City Library, May 2012.
Small beginnings, Peter Adderley, Peter Rea and Bill Shute with the first three models publicly displayed. The event was the 70th anniversary of the attack on Sydney Harbour by the Imperial Japanese Navy - Eastern Attack Group.
The three original models along with anther nine models have now been incorporated in 4HR's first major exhibition 'Submarines Off The Coast' exhibition see our 'Submarine' page.

Two 1/72 scale aircraft built straight of the box by Peter Adderely for the display of individual aircraft from Rathmines RAAF Seaplane Base (see our 'Rathmines' page).
left: Short Sunderland is awaiting RAAF decals. 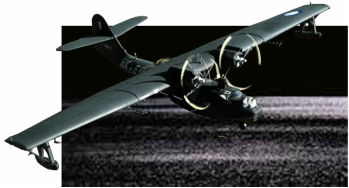 Right: Constellation PBY (Catalina) built by Peter Adderley complete in 'Black Cat' paint and RAAF markings. The model was 'photoshopped' by Peter Rea to be flying over a moonlit Pacific with props spinning see our 'Rathmines' page.

Above: Michael Evans with some of his scratch built work, Mick built the model of HMAS Swan for 4HR's WWI project. The Swan is currently on loan to Henry Kendall Museum, Henry Kendall Street West Gosford see 'HMAS Parramatta and HMAS Swan' page. 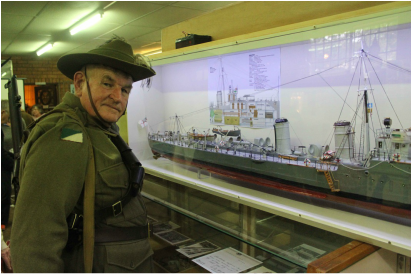 NSW History Week, 2014 was on the theme of 'The Great War'. Henry Kendall Cottage and Museum at Gosford organised an appropriate event, with over 100 people attending.
4HR provided the second presenter, with the opening presentation by Professor Richard Waterhouse from NSW History Council. Bob Pankhurst gave the final presentation complete in WWI Australian Light Horse uniform and horse tethered outside fully equipped for a charge at Beersheba. 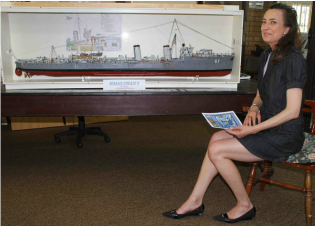 4HR has loan the Mick Evans built model of HMAS Swan to the museum and Bob Pankhurst (above) found the model, of the same period as his uniform, very interesting.
Because of the public interest, museum curator, Kreenah Yields (right) has asked 4HR to keep the model on display
until it is required for incorporation into the
4HR WWI exhibition due for unveiling on 25 April 2015, the 100th centenary of the Anzac participation in the invasion at Gallipoli,Turkey.
Other Projects of 4HResearch that require scale models:
The 4HResearch is presently working on a number of projects, those that particularly require scale models are:
Suggestions for other projects that anyone is willing to assist with are welcome. For example a couple of years ago ex-HMAS Adelaide was scuttled off the Central Coast. With that local connection we aim to complete a exhibition of ‘HMAS Adelaide, it's size, protection and armament - compared to other warships ships from other eras’.
Other projects with plenty of scope for scale models are:
To contact us please use the 'Contact Us' form.
Powered by