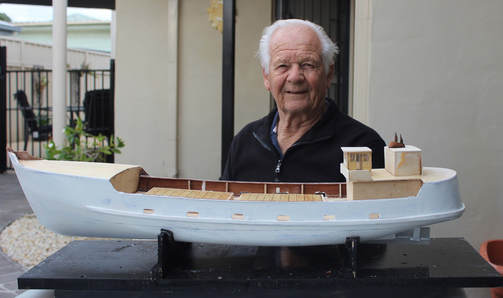 PATRICIA CAM
The Patricia Cam was built at George Beattie's ship yard 'Palermo' on the Brisbane Water, New South Wales Central Coast. It was launched in 1940, requisitioned by the Australian Navy in 1942 it was sent to Darwin.
On 22 Jan 1943 it was attacked and sunk by an IJN Aichi E13A (Jake) sea plane.
​Construction of a 1:50 scale model has commenced. Photo: Bill Bollard 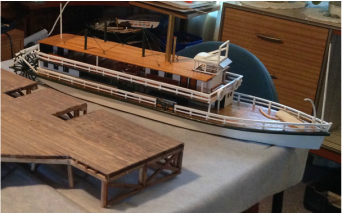 GENERAL GORDON
One hundred and twenty years ago the great Australian eastern railway had reached from Brisbane to Gosford on the North Arm of Broken Bay. From the south the line joined Adelaide with a wharf on the Hawkesbury, a total of 2,600 klm. While one of the longest bridges in the world was flung across the river, the General Gordon transported the passengers. More... 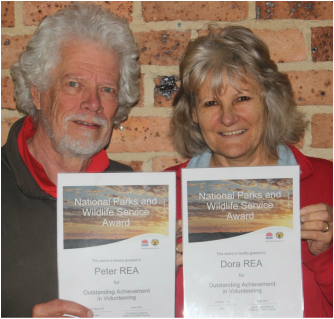 'OUTSTANDING ACHIEVEMENT' AWARDS
On Friday 17 June 2016, Peter was in Sydney undertaking further research for the General Gordon Project when Dora phoned him and said that they had just received a hand delivered envelope to their home which contained two individual National Parks & Wildlife Service Awards for ‘Outstanding Achievement’.
Dora and Peter wish to point out that they receive a lot of support from a lot of people and they wish to thank all those who have provided and continue to provide so much support for their work. 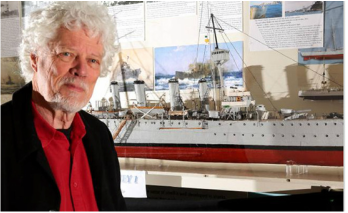 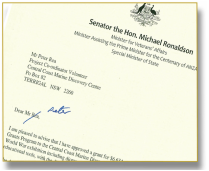 FEDERAL ANZAC GRANT 2014
To commemorate those Anzacs who died and suffered from their wounds as a result of the 1914-18 war, we have been allocated a small part of Federal Government grant funding to cover materials and expenses for a series of exhibitions for the Anzac Centenary Year. The application went in May 2014, a letter of approval, dated Dec. was received in Feb. 2015. The funds were transferred on 24 April, only one day before Anzac Day! 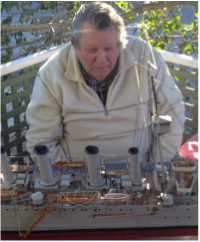 ﻿MICK EVANS HMAS SYDNEY MODEL﻿
Mick Evans with the 2nd ship he built for 4HR. The 1.8 m long model is housed in a display case made by Bateau Bay Men's Shed with internal lighting by Peter Adderley.
Also within the case is a 1:350 scale SMS Emden, a specially drawn 1:350 illustration of Sydney, other graphics produced by Peter Rea and historic photos relating to the 1914 Sydney/Emden  engagement. 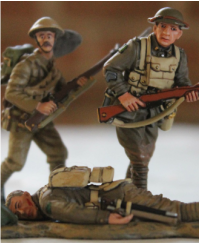 CONSTRUCTION OF WWI DIORAMAS - Updated 18/4/16
The construction commenced in June 2014 with a Gosford City Council Community Grant for materials. At the same time a Federal Government grant was applied for, it took about 5 months just to gain grant approval. Appeals to Canberra and the Member for Robertson fell on deaf ears. With over a thousand hours work to be done the long promised funds finally arrived just 48 hours before ANZAC Day. Personal funds kept the projects moving slowly. Also during this time the $AU dropped dramatically effectually reducing the amount required...all very disappointing  More…. 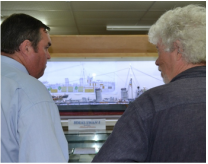 MEMBER FOR GOSFORD VIEWS 4HR's WORK 2015
'If we don't know where we came from how can we know where we're going' said Member for Gosford Chris Holstein to around 60 people at Gosford's Henry Kendall Museum on 21 Feb. 2015. The Hon. Member also took time to look at the historic models 4HR had on loan to the museum and talk to 4HR about their ongoing work which he highlighted in NSW Parliament last year.
4HR has been working on a number of subjects related to various war periods, these have been collected under the title... 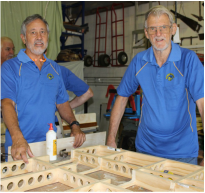 WE START A WORLD WAR
…and it's going to be a big one, opening shots were fired June 2014, with the purchase of a model of HMAS Swan see HMAS Swan. We also started assembling components for a number of dioramas;  'WWI Field Hospital', 'The First Troop Convoy (including the HMAS Sydney/SMS Emden engagement)', 'The Australian Light Horse at Beersheba' and the first to be completed 'The Western Front' which is really about to take shape with Doug (R) and Lee (L) from Gosford Men's Shed, finishing the base board. More...

SUBMARINES OFF THE COAST
In May 1942, the Imperial Japanese Navy's Eastern Attack Group comprising of 8 submarines rendezvoused at a point between Maitland Bay and Broken Bay on the New South Wales Central Coast.    More...

JUNO POINT DEFENCES
On the Hawkesbury River near Patonga, Central Coast NSW, is a WW2 defence site which supported 18 pound guns and was a control point for a system of underwater electronic detection loops and a minefield on the river bed.    More... 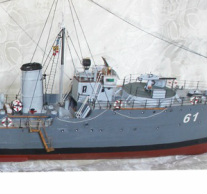 HMAS PARRAMATTA AND HMAS SWAN
The HMAS Parramatta and HMAS Swan were two ships of the six Australian River Class Torpedo Boat Destroyers (TBD) that were built between 1909 and 1915. The Parramatta was the first ship ever built for the Australian Navy and the Swan was the first warship ever laid down in Australia.
The wrecks of these two historic ships rest in the Hawkesbury River. More...

RATHMINES RAAF SEAPLANE BASE
On Lake Macquarie, New South Wales, was the largest seaplane base in the southern hemisphere during WW2.   More...

WEST HEAD BATTERY
Between the mouth of the Hawkesbury and Pittwater is Ku-ring-gai National Park. Within the park, below the cliffs of Commodore Heights is an old defence complex known as West Head Battery (WHB). It's dual 4.7" guns, two story command post and railway system including a 150m long inclined railway make it unique in Australia.   More... 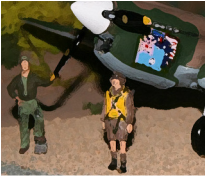 WWII THE FIRST YEAR OF THE PACIFIC WAR
For the past four years 4HR has been assembling scale models
preparing for the exhibitions to be displayed in 2016/17, the 75th anniversary of incredible events that occurred in the first six months of the Pacific War.
It took four great European Nations (plus the USA), four centuries to build empires that Japan destroyed four months.

WOY WOY TUNNEL NAVVIES CAMP
The Hawkesbury River Rail Bridge (opened 1889) and the Woy Woy Tunnel (opened 1887), were the last links in a railway system that linked Brisbane through Sydney and Melbourne to Adelaide. 600 labourers known as 'navvies' and their families were encamped at the southern end of the tunnel for 3 years during construction. 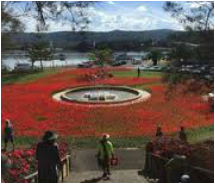 ANZAC DAY POPPIES...'THE' most popular Anzac Centenary event.
It's hard to believe this grass roots project failed to gain any of the $125,000 lavished on the seat of Robertson by the Abbot Federal Government.
Gosford City Council came to the rescue and it proved to be a truly great success, one which we hope will be emulated in years to come.
4HR congratulates all involved. More... 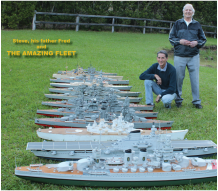 STEVE AND HIS FATHER FRED'S FLEET...a life long project
In April 2015 we had the pleasure of meeting Frederick James Wickham and his son Steve John. As a result we had the opportunity to photograph their fleet of mostly operational warship models.
Steve has offered assistance with a model or two for 4HR's upcoming diorama of the WWII engagement of HMS Prince Of Wales and HMS Repulse with Japanese airpower in December 1941. 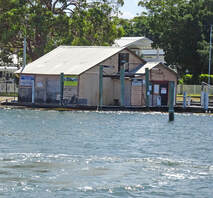