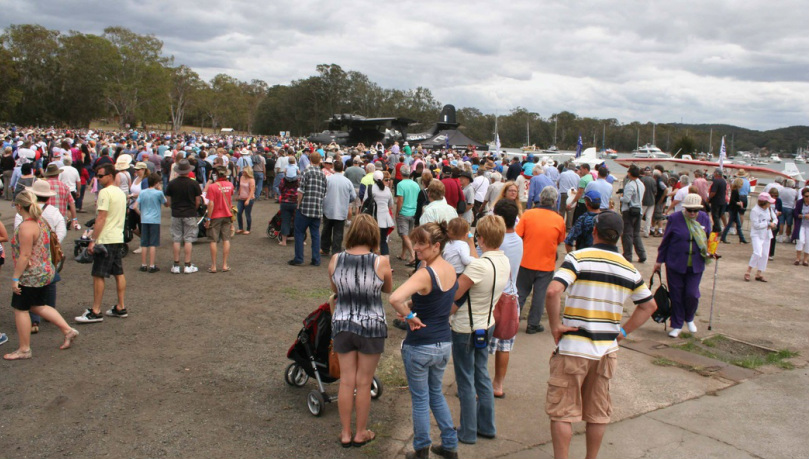 An estimated 10,000 people attended the Annual Rathmines Catalina Festival in 2012, with many viewing the diorama. Children attended three ‘special school’ days the week before.
RATHMINES RAAF SEAPLANE BASE.
The Base is located on the western side of Lake Macquarie NSW, a 11/4 hour, drive north of the Sydney suburb of Hornsby. The site is heritage listed by the NSW Government and an application for similar recognition has been made to the Federal Government.
The Base began to be established in 1939 and operated from 1941 until 1952. The largest hanger in the Southern Hemisphere was built there, after the war the hanger itself was taken to the Richmond RAAF Base. The ‘L’ shaped buildings that made up the northern and eastern sides of the hanger remain, as do some other original buildings.

Peter Rea with children who attended three ‘special school’ days the week before the 2012 Rathmines Catalina Festival.
At its peak, stationed at the base were about 3,000 personnel and over 40 seaplanes mostly PBY ‘Catalinas’. Over 300 young men, who made up the aircrew of these aircraft did not survive their missions, with an unknown number wounded or injured. This diorama is dedicated to them in particular and also to all casualties of war.

Alan Cameron has added invaluably to the perspective element of the diorama with his three hand carved PBYs in three different scales.
THE DIORAMA
2.4 metres long and standing a total of 1.8 metres high, this is a model of the apron, hard stand, hanger area and surrounding lake of the Rathmines RAAF Seaplane Base as it appeared in 1943.
The model employs the concept of ‘forced perspective’. This is where larger scale models are used at the front and smaller scales toward the back to giving an impression of depth. 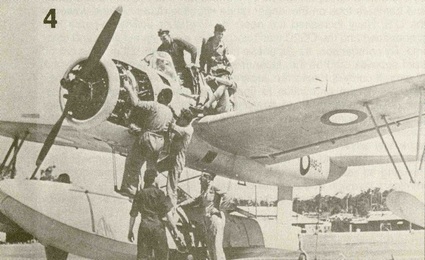 OS2-Kingfisher screen.
This part of the diorama is based on a photo (left) sent by National Naval Aviation Museum Pensacola, Florida USA. It is an Australian photograph.
The scene below will be developed to represent, as close as possible, the Pensacola photograph. The models cast resin engine has hand made exhaust manifolds and engine brackets. 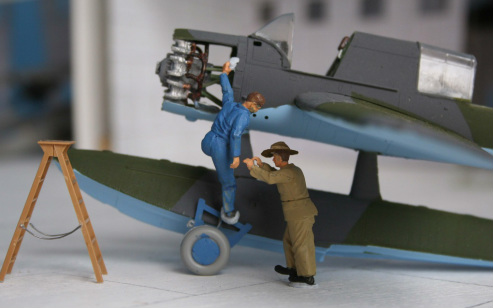 Following six months intensive development, construction and modelling, the diorama was unveiled to the public at the ‘Annual Rathmines Catalina Festival’ in November 2012. It is estimated to be about half way complete with the ‘bones’ of the model in place. The aim to complete the diorama for the 2013 ‘Catalina Festival’ with a Central Coast promotional preview in October, was not be realised. Work on the 'Submarines Off The Coast' took priority. Sadly the diorama did not appear in any form at the 2013 Festival as transport for the large work could not be organised. 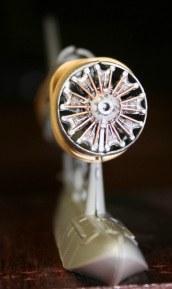 OS2-Kingfisher screen.
The engine is a cast resin model, the push rods, oil lines, exhaust manifolds, engine supports and brackets are all hand built. The fuselage has been thinned to allow fitting the engine and give a more realistic appearance.

The interior is fully detailed with cast resin parts, most parts were painted aluminium first, then when the top coat was applied the edges were rubbed to give a worn appearance.

During 2013 two other 4HResearch projects received significant support including financial, therefore these projects took priority. While some work continued on ‘Rathmines’, it will have to be displayed as ‘a work in progress’ for the foreseeable future. The main buildings are at various stages of completion, as are ten aircraft, 25 figures, six trucks and tractors. What time is available will be spent completing the buildings. When it is finished, the diorama will exhibit 19 aircraft, along with numerous boats, vehicles, figures and other detail items. Internal lighting of the buildings will enhance existing integral lighting.

Left and Below: This scene represents activity involved in bringing a Vought Kingfisher ashore. The man at the tractor will be attaching a cable from the aircraft, the man behind him in gum boots will be pulling wheel chocks, while further down the ramp another man (very out of focus) is also pulling wheel chocks. Further research is required to determine what other equipment was used during this procedure and what duties other staff would have been doing. As the scene is set during the colder months it is presumed some staff would be wearing some kind of water proof attire and not just in swimmers.

Above: In the centre of the concrete apron is this pristine looking 1:72 scale PBY ‘Blackcat’ appearing to have just come out of the water and up the ramp. This aircraft will probably receive some serious ‘weathering’ so as to appear as if just returned from a mission. The main hanger appears in the background to the left and to the right is 1:144 scale PBY ‘Blackcat’. The detail marking out of the concrete can be seen.
The ‘bones’ of the diorama are in place, over the next twelve months the existing aircraft and buildings will be completed. More aircraft and numerous other detail items will be added.
More personnel will be added and some of the existing figures will be reworked to appear a little more realistic. For the 2012 Festival they were only held in place with Blue-Tac.
Additional buildings, include another hanger. Vehicles will include more tractors, ambulances, cranes and cargo trucks.

Two AEC Matador trucks one 1:76 scale and the 1:144 scale add to the perspective effect.

A 1:72 scale PBY, built by Peter Adderley, sits on the concrete apron attended by ground crew and looking as if it has just come up ramp from the lake. This very pristine looking aircraft is due for some serious 'weathering' to give an appearance of having just returned from a mission. The marking of the concrete is based on aerial photographs.
Home
Powered by