Of all Gosfords various Anzac Centenary commemorations this was the standout in, it also drew attention to the threatened Gosford Cenotaph.
Many ceremonies held across the nation flew the flag for the Centenary, these used the heftily funds, worth many millions of dollars, from the Abbot Federal Government. This grass roots community project appears to have been actually rejected for funding by the local Federal Government Committee.
It was finally supported by Gosford City Council and stood out as THE Central Coast Anzac Event, which drew hundreds of thousands of people to see it... and remember.

The concept of this project was not a thinly veiled glorification of war, but focused on some of the things Australia tragically lost as a result of The Great War, the broken bodies, hearts and dreams.

On 8 August 1916, Private Cyril Henry Martin died on the killing fields of France. ‘In Memoriam’ these words were inserted by Cyril’s parent’s in 'The Gosford Times' Thursday 9 August 1923. This only made the organiser even more determined to plant community-inspired poppies for the Anzac Centenary


He is buried away in France,
And his grave we may never see;
Will some kind friend in that distant land
Plant a flower on his grave for me
We still seem to see his smiling face,
Through a mist of anxious tears;
But a mother's heart is a broken heart,
And a burden of weary years. 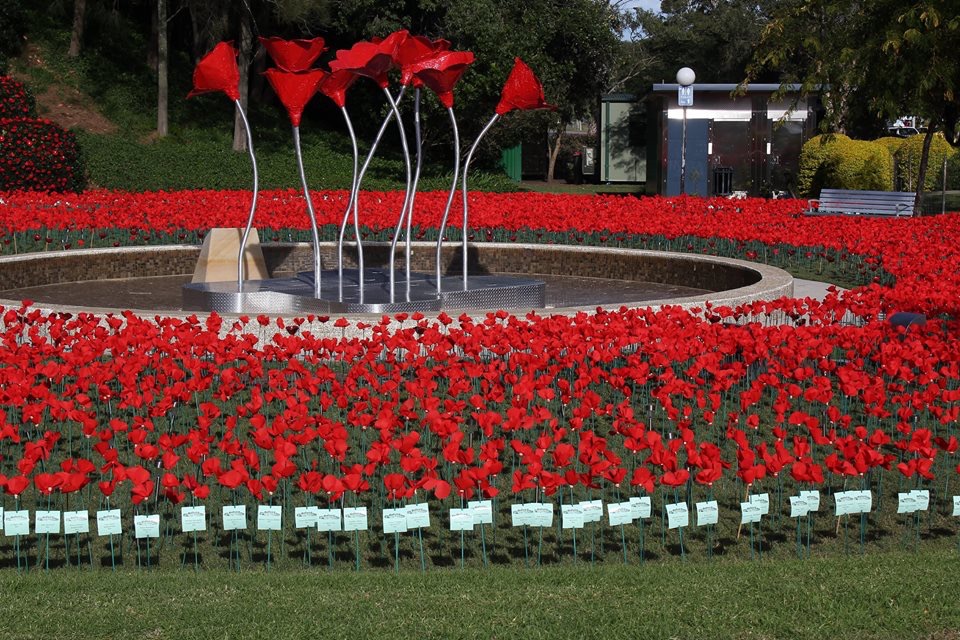 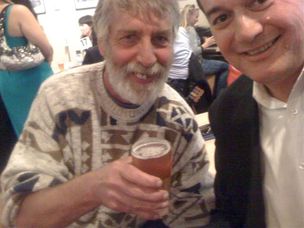 Over the years Anzac Day has meant many different things to many different people.
The horrific losses have been smoothed over as the years have seen all those actually involved or directly affected pass away. The actual reasons for those tragic losses have been lost in the all encompassing very vague phrase 'for our freedom'.
Tributes should be justifiably payed to all those who suffered during that momentous war.  Now 100 years on we might reflect on how it started and how we actually got involved. 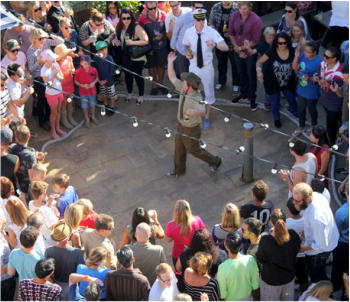 A BIT OF LITTLE KNOWN HISTORY
The Reasons for the War
The main reason for the war starting seems that Germany was a bit miffed. As late commer to the practice of powerful European countries dividing up the rest of world into colonies, they had missed the coach. By winning a war with France, Germany would demand some of French colonies as retribution...result instant Empire!
As a route to invade France, Belgium was invaded. The war further escalated, for example into the Middle East, which was a catalyst for all the tragedy unfolding there today....however, that's another story.
A BRIEF HISTORY OF BELGIUM 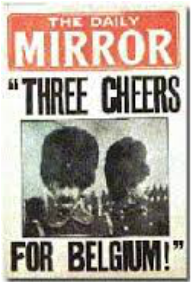 Belgium was established in 1830/31 being separated from the Netherlands with the establishment of a Catholic bourgeois and a King, Leopold I. The actual reason for Britain and therefore Australia going to war was because Germany invaded Belgium after that country refused passage to the German army en-route to invade France. Some 20,000 Germans and 30,000 Belgians were killed in this action. By this slowing of the German advance the expected quick victory over France was not achieved. The war dragged on for four costly years and Germany was less than conciliatory toward Belgium as a result. The many cases of mistreatment of the Belgium population was exploited in propaganda by the allies and the media catch phrase 'Poor little Belgium' was common. 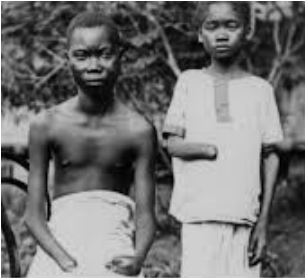 Belgium's own record of human rights was less than perfect, however. Since the mid 1850s under King Leopold II, the Congo region of Africa was mercilessly exploited. Methods like the wives and children of rubber gatherers imprisoned as hostages to ensure rubber quotas were met, amputation of hands was a regular occurrence. Rape and murder were common, the reduction of Congo’s native population from 20 million to 10 million during this period is estimated. Germany's treatment of Belgium resulted in vast amounts of media tears, war and the death and sufferings of thousands of Australians. Belgium's ongoing treatment of Congo, however, didn't raise a eyebrow.
Congo did not gain independence from Belgium until the1960s.
Picture: A regular occurrence under the Belgium régime, was the amputation of hands. 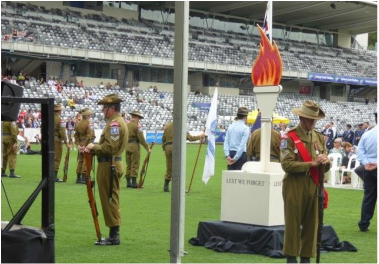 Australia lost a great deal as a result of the war, over 61,000 died up to the wars end (today this many can be killed in a half hour video game session).  This disguised the many that died from war injuries after the war officially ended. The wounded lingered on, suffering for many years. During the height of the great depression more men were on war pensions than on unemployment relief. Australia's economy was devastated, making the loss of loved ones even more unbearable.
Above: Sadly, despite the many thousands of Federal
Government dollars expended on it, the official regional
service at Gosford was poorly attended and publicly criticised. 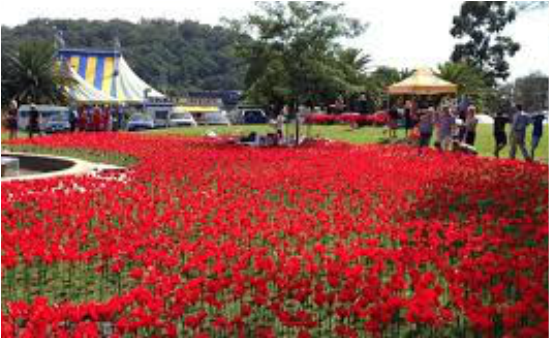 Never Forgetting the Sacrifices- Gosford held a community inspired event to commemorate the 100 years of Anzac Centenary. Drawing upon historical research, specific to local soldiers of the Central Coast, NSW, and utilising her artistic background, Merril Jackson wanted an Anzac event to engage the whole community, with specific requirements that it would cater for all age groups. 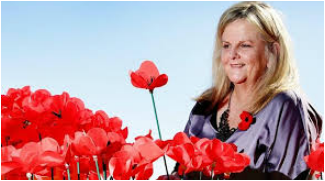 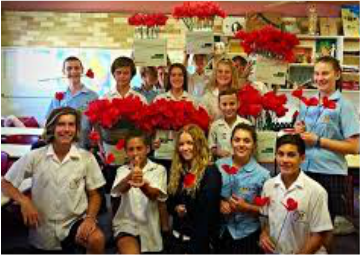 Gosford City Park forms a very significant and symbolic part of Gosford War Memorial Park and was a key part in presenting this event to the Central Coast. Captain Irvine Fleming Campbell, a former resident of Gosford, penned his last letter home in 1915 just prior the Gallipoli campaign referencing the beauty of the Brisbane Water, and similarity of the idyllic Broadwater to his Mediterranean surrounds. Campbell’s letter also referenced isolated poppies seen during his time at Lemnos, prior to disembarking for Gallipoli.
Above: Umina High School got involved
Further research into local Matcham lad, Private Cyril Henry Martin of the Australian Imperial Force drove the determination to make the Poppy Project for the Central Coast a reality, despite the total lack of Federal Government support for it.
The life of Cyril Henry Martin, a lad having a working-class background, labourer who loved a game of football with his Matcham team mates would have his life cut short after enlisting to serve for God, King and Empire. Cyril Martin enlisted alongside his older brother and just over half of his Matcham teammates. As part of the 53rd Battalion, Cyril’s life ended not long after he was wounded on 19 July 1916, at Fromelles. 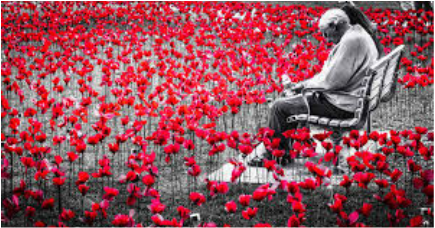 This horrific Western Front campaign was one of bloody sacrifice, with men in the trenches being ordered to go ‘over the top’ into the line of fire. Some Martin family members recall the story passed down, how Cyril having witnessed his brother, Harold George Martin wounded, ran over and sat by his side. This act of love cost him dearly, with a fatal wound received to his back and shoulder finally ending his life on
8 August 1916. Private Cyril Henry Martin is       Picture by Ted Szukalski
buried in Wimereux Communal Cemetery, France.

The following words opened this page and it's fitting it is closed with the same:
‘In Memoriam’ words inserted by Cyril’s parent’s in The Gosford Times Thursday 9 August 1923 only made Merril Jackson even more determined to plant community-inspired poppies for the 100 year Anzac Centenary :
He is buried away in France,
And his grave we may never see;
Will some kind friend in that distant land
Plant a flower on his grave for me
We still seem to see his smiling face,
Through a mist of anxious tears;
But a mother's heart is a broken heart,
And a burden of weary years.
HOME
Powered by