Over the past 5 years 4HR has researched and produced award winning graphics on the history of the BrokenBay / Hawkesbury / Gosford / Brisbane Water / Lake Macquarie areas.
Some projects have received some grant funding, however, short falls in grant funding, other projects and this website are personally financed.
In December 2016, operating as AREA History Tours, unique, budget priced history ferry tours were commenced by 4HR.
A portion of the fares from each tour comes to AREA History Tours and a good portion of that goes into 4HR projects and maintaining this website.
To take the tour, Visit areahistorytours.com.au
HMAS Parramatta and HMAS Swan

The HMAS Parramatta and HMAS Swan were two ships of the six Australian River Class Torpedo Boat Destroyers (TBD) that were built between 1909 and 1915. This class of ship developed into a class which became known as simply ‘Destroyers’. The significance of both these ships in Australian maritime and particularly Naval history cannot be overstated.
Both used the advanced technology of oil fired rather than coal fired turbine engines.

THE DISPLAY
Detailed plans for the River Class TBDs were supplied by a kind benefactor. From these drawings Mr. Michael Evans built this model of HMAS Swan I. The model is over 1.5 metres long, a display cabinate was built by a skilled carpenter at Bateau Bay Men's Shed and LED strip lighting was fitted by Peter Adderley. The model was first displayed in October 2014 at Henry Kendal Museum, Henry Kendal Street, West Gosford. The popularity of the model has caused the museum to request the exhibition period be extended.

The dockyard drawings gained by Peter Rea included the internals of the ship and these he used to produce a detailed cut-away illustration. Peter put in around 750 hours over a ten month period to complete the illustration above. The graphic is exactly the same length as the the model, about 1.5m, it is displayed below the model with historic photos above.
Hydrographic images of the sunken Swan from the Australian Hydrographic Service R.A.N are also included in the exhibition. 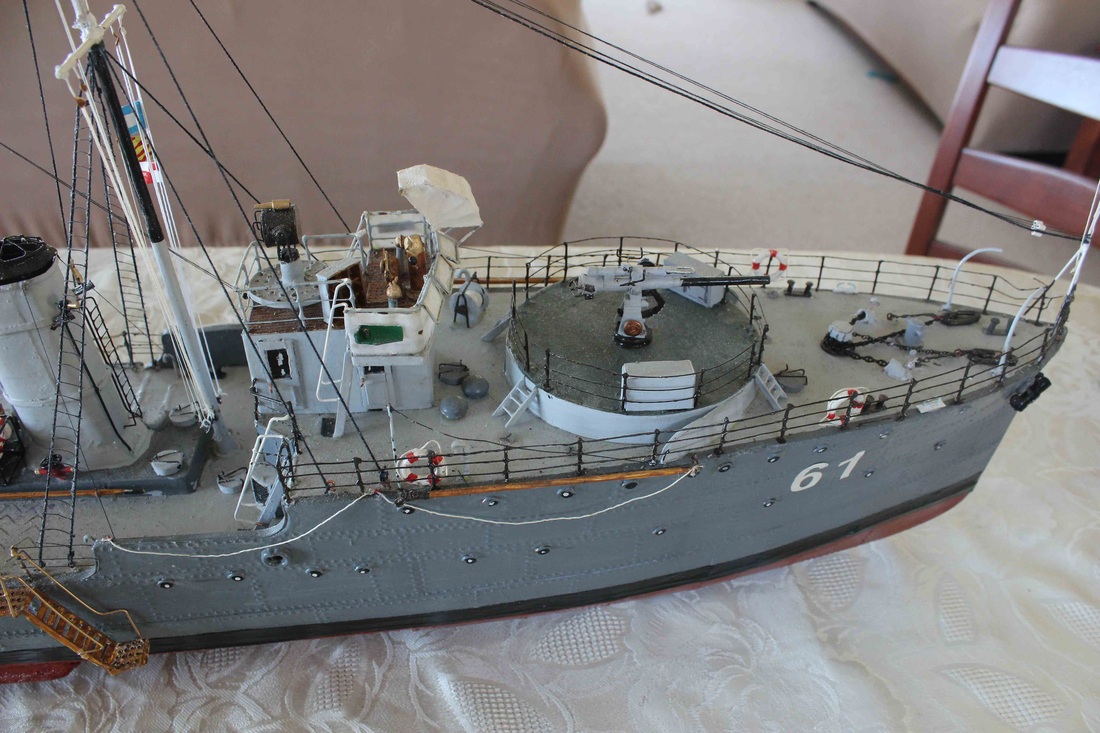 THE HISTORY
HMAS Parramatta during the early stages of WWI, operated with the Australian fleet in the search for the German East Asia Squadron and SMS Emden. It was then involved in the capture of German colonies in the South Pacific region, including German New Guinea and the consolidation of Allied occupation in these regions. During October 1918, following the surrender of Turkish forces, Parramatta accepted the surrender of a German admiral assigned to the area, something which was not achieved during the Dardanelles and Gallipoli campaigns. 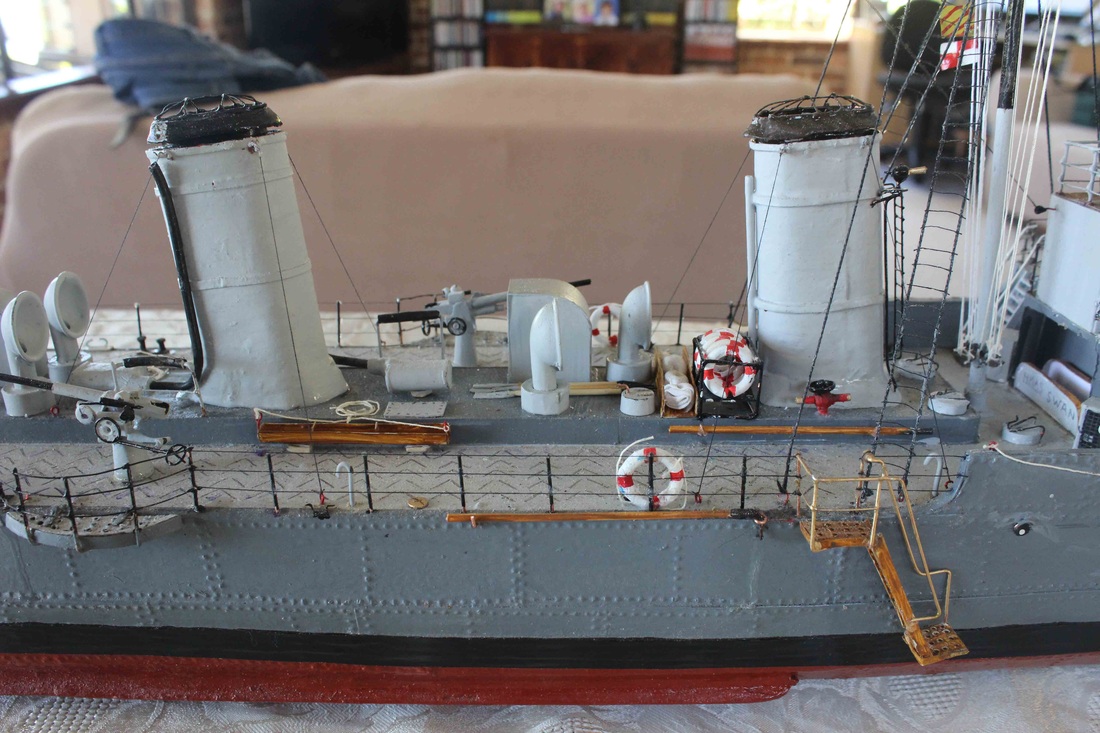 HMAS Swan during the early stages of WWI patrolled the waters around present-day Malaysia and Philippines with HMAS Torrens and HMAS Huon. In October 1918 HMAS Swan assisted Japanese destroyers convoying troops from Egypt to Salonika and in December she carried out operations in Russia, during which her crew carried out anti-communist guard duties at Sevastopol. 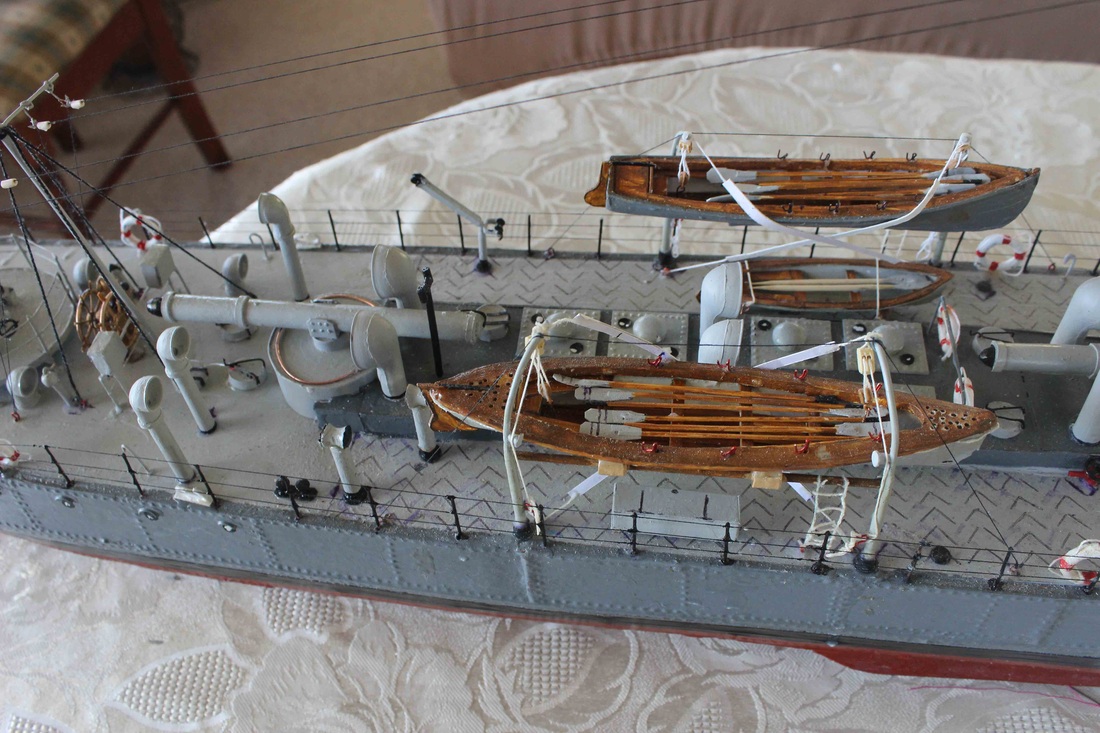 Both ships were paid off from service on 20 April 1928 and sold to the NSW Penal Department. They were moored in the Hawkesbury River to house prisoner laborers working on roads along the river. Following an outcry regarding the conditions for the prisoners, the vessels were sold on for 12 pounds each and were eventually used to transport blue metal. On 2nd February 1934 while awaiting being taken to Sydney for final breaking up, a sudden gale caused them to break free of the tow ropes and they were both carried down river. 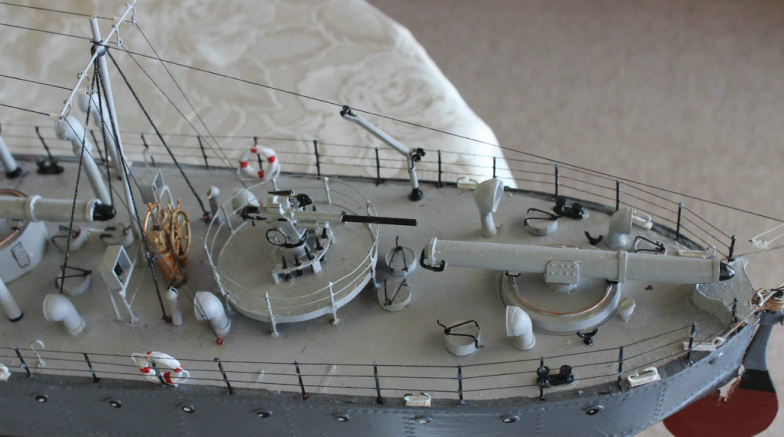 Michael Evans model of River Class TBD HMAS Swan, is a superb example of ,
this type of ship, it will be perfect for 4HR's planned WWI exhibition!

THE MODEL ON DISPLAY

Above: At Henry Kendall Cottage and Museum, West Gosford, Dora from 4HR assists with some information about the HMAS Swan and other ships in the class. The model  proved very popular when on loan, it was on display at the Museum.
Unveiled there as part of NSW History Week in September 2014 it was due for removal in November. The curator of the museum, Kreena Yelds (left) and President of the Brisbane Water Historical Society, Edith Campbell, asked for the model to be held over until 4HR requires it for inclusion in their 2015 exhibition.
The 2015 exhibition included a display of the model combined with special graphics and historic photos, being first displayed at the ANZAC Centenary, 25 April 2015 Gosford Stadium. It went on to Breakers RSL Club for a very popular display period..
Home
Powered by